PRODBOARD > Updates > Kitchen planner can now support HTTP2. What will it affect?

The use of http2 “will lead to faster page loads and to more responsive web sites …” – Daniel Stenberg, a member of the IETF HTTPbis working group, which developed the http2 protocol. 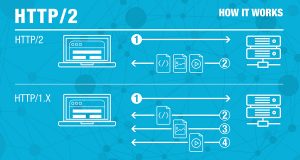 In the first place, it’s necessary to understand, what is the difference between both protocols in terms of performance features.

The HTTP1 protocol consists of a great number of small details and options available for altering. This made HTTP1 to be perceived not so straightforward and simple as before. As a result, web site page loads take more time. And it doesn’t depend on the extent to which broadband connection is used.

To solve latency problems, the following optimization hacks are applied: spriting, sharding, inlining, concatenation. But it also leads to negative consequences for other spheres of network performance.

The updated HTTP2 protocol is more refined. It is a binary protocol. In contrast with its predecessor, in HTTP2 a server can send to a client not only the request reply, but also some additional data, which presumably may be needed to a client in future. It is not going to be necessary to request such data from the server anymore. It is sent to client’s cache initiated by the server (Server push mechanism) and will be used when required. Besides that, other techniques are used as well. Among them there are multiplexed streams (to overcome a problem with «head-of-lineblocking»), compression and prioritizing the requests.

As is seen from the image, the way and form of data transfer in a server-client chain has changed. This results in reducing the network load and simplifying the command processing and performing in comparison to HTTP1.

Through the use of these steps, and, as a consequence, reducing latencies when processing browser requests, the main goal of the HTTP2 protocol is achieved – high performance, robustness and simplicity.

In addition to the advantages of HTTP2 in terms of performance, an improved data protection mechanism has been also noted. Encryption has become faster. Data compression in HTTP headers is conducted by means of improved HPACK algorithms.

Most of browsers, for instance, Chrome, Firefox, Safari, etc, as well as mobile browsers (AndroidBrowser, Chrome for iOS and Android) support HTTP2.

Consequently, it becomes obvious, that great many advantages of the HTTP2 protocol match the core objectives of its creation, and in particular:

6 thoughts on “Kitchen planner can now support HTTP2. What will it affect?”